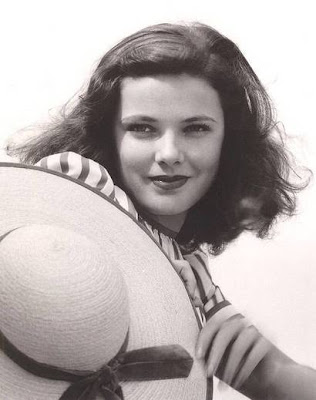 What did actresses Dorothy Dandridge (1922-1965) and Gene Tierney have in common, besides being considered among the great beauties of their generation? Both November birthdays. Both were directed by Otto Preminger in well-known roles (Carmen Jones, and Laura, respectively). Both women, in 1943, had daughters born with significant developmental disabilities. And both women's later lives were emotionally tumultuous. These latter two facts are often linked in brief biographies, whether or not they should be, just because that's the easy story. In fact, the pressures and temptations and health issues they faced were sure more a part of the general dysfunction of Hollywood life, with or without their daughters' disabilities.

Gene Tierney (1920-1991) described her lifelong experience of bipolar disorder in her 1979 autobiography. She was institutionalized on and off through her thirties--not unlike yet another Hollywood beauty, Frances Farmer (1913-1970), had been a decade earlier. In her autobiography, she declared, "I have been subjected to electric shock treatments that deadened my brain, stole chunks of time from my memory, and left me feeling brutalized....Pieces of my life just disappeared." Tierney married her second husband in 1960, and more or less retired from making movies. She died in 1991, from emphysema (she had begun smoking at the beginning of her career, to lower her voice for film roles).
Posted by Penny L. Richards at 7:14 PM

Whether Ms Tierney and Ms Dandridge knew each other is a matter for others, I suppose. However, they were in the same movie,"Sundown" with Bruce Cabot and George Sanders (Ms Dandridge was unbilled.) This was a WWII desert actioner of no great merit. It is certainly possible that the two ladies met each other although I don't recall they appear in any one scene together.