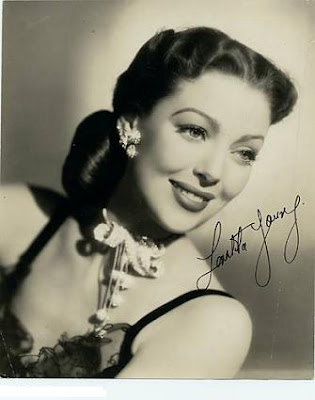 I hated school . . . . One of the reasons was a learning disability, dyslexia, which no one understood at the time. I still can't spell . . .

American actress Loretta Young (portrait at left) was born Gretchen Young 95 years ago today in Salt Lake City. She won an Oscar for Best Actress in 1947, for The Farmer's Daughter, and had a long-running anthology program on NBC in the 1950s.

She remembered complaining to her mother that she couldn't tell the b's and the d's apart in her school readings; so the family had her vision checked, but there was little more support available in the 1910s and 1920s. By her early teens, she was tutored on movie sets, and not expected to study much. She recognized herself as having dyslexia when she first heard the word, after a career in which she memorized whole scenes to avoid reading unfamiliar text in front of others. She was one of the early celebrity readers to volunteer her time and voice for making audiobooks produced by Recording for the Blind -- now named Recording for the Blind and Dyslexic.
Posted by Penny L. Richards at 9:20 PM

Loretta Young was always one of my favorite actresses. I remember as a child seeing her and wondering how anyone could be so beautiful. I never knew she had dyslexia...

Loretta Young is an interesting actress. It is surprising she could overcome this weakness to become as great as she was.