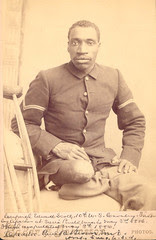 [Image description: sepia-toned photo of an African-American man in uniform, seated, facing the camera, with one leg amputated; the leg on the viewer's left is exposed to show the healed surgical site. A set of crutches are leaning against the chair.]

This time, it's content from the Otis Historical Archives in Washington DC, which specializes in images from the history of public health and military medicine, but there are other themes too. Image above is of "Buffalo Soldier" CPL Edward Scott of the 10th US Cavalry, injured 3 May 1886 at the Battle of Pinito Pass, Mexico (sent to chase down Geronimo and his men). These images (about 600 of them) aren't part of the Flickr Commons project yet, but apparently that's in the works; meanwhile, you can still browse and add comments.

BUT WAIT, THERE'S MORE: Battlefield Biker has more of Corporal Scott's story, including this quote from a letter written by his rescuer, Lieutenant Powhatan Clarke: "The wounded Corporal [Scott] has had to have his leg cut off, the ball that shattered it lodging in the other instep. This man rode seven miles without a groan, remarking to the Captin that he had seen forty men in one fight in a worse fix than he was. Such have I found the colored soldier."

Anonymous said...
This comment has been removed by a blog administrator.
2:31 AM