The face of George Everett Greene 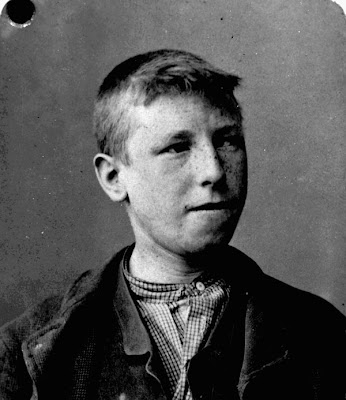 [Image description: head-and-shoulders photo of a 14-year-old boy, taken in 1894--he has close-cropped sandy hair and is wearing an ill-fitted collarless shirt under at least two other layers]

Back last May, for Blogging Against Disablism Day, I wrote up a post about George Everitt Green (1880-1895), an English child who was apparently killed by his foster mother in Canada after he didn't match her expectations for what a teenaged boy should be able to do--he was described as small for his age, "backward," and as having "defective vision." The foster mother was never convicted, and the case was used to spur feeling against immigrants, especially young disabled immigrants, as the "diseased offscourings of the hotbeds of hellish slumdom."

In that post, I wondered if there was a photo of Green anywhere--the Barnardo emigration program that brought him to Canada was famous for photographing each boy before he set sail. Well, thanks to a new comment on that post from sarahquay, I now know there is a photograph of Green, in the Library and Archives Canada, and it's online.

"Death through ill-usage" is the wording of the crime in his file (where the name is spelled "George Everett Greene," thus the spelling in my title above). Above is George Green, age 14, about to board a boat to North America. Hopeful, maybe; confused, maybe; wary, probably; young, definitely. Not much older than my own son. Within the year, he would be dead from abuse, malnutrition, exposure, exhaustion, and gangrene. He's looking out across more than a century, and I wish we could look back and say "things have changed." But they haven't, or not nearly enough.
Posted by Penny L. Richards at 11:40 AM

Reading this (and your original post) right now is even more heartrending given that Robert Latimer just received day parole and will be free to pursue his plans of fighting to change the law that convicted him of murdering his disabled daughter. When I read the national newspapers here in Canada describe Tracy Latimer's murder as a "mercy killing" or "compassionate homicide," I think we haven't progressed at all since the killing of George Everett.

I realized that I am just a lurker here and have never stopped in to say how much I love this site, this post moved me to actually say something. Penny, I am a huge fan of your work, bringing people from history to light, letting us honour their lives - even from the distance future creates matters. Thank you, thank you, thank you.