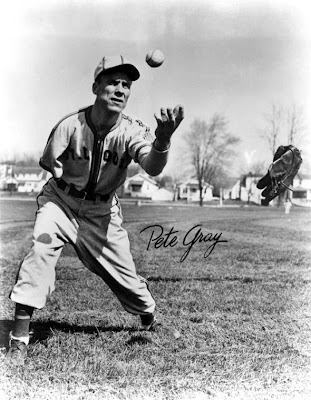 [Image description: a black-and-white publicity photo of a one-armed baseball player in a St. Louis uniform, autographed "Pete Gray"; he's tossing a ball in the air, while nearby his glove is midair]

Ask most baseball fans today to name a one-handed player in the Major Leagues, and they're likely to say Jim Abbott--and that's a good answer. But ask someone older, from northeastern Pennsylvania, and you're as likely to hear the answer "Pete Gray." Pete Gray was born Peter Wyshner in Nanticoke PA, this date in 1915, the son of immigrants from Lithuania; his right arm was amputated at age 6, after a wagon accident. Wyshner lived in coal-mining country, so there were plenty of others with accidental injuries and lost limbs in his community--and it wasn't considered too unusual that he'd still want to play baseball. When he wasn't working as a water boy at the Truesdale Colliery, of course.

He played in the minor leagues during the WWII, when so many of the usual players were in uniform; then in 1945, he was picked up by the St. Louis Browns, and played 77 games in the majors as an outfielder. He was famous for the speed with which he could catch a ball in his glove, toss the ball in the air, remove the glove, grasp the ball, and throw it (that's the maneuver depicted in the publicity still above). As Pete Gray, he was featured in newsreels, a novelty story intended to inspire returning troops and attract audiences to the games. He stayed in baseball's minor leagues into the early 1950s, then retired to Nanticoke. His later years were hard; he died in a nursing home in 2002, after years of alcoholism and very little income. Pete Gray's glove is in the Hall of Fame at Cooperstown.

I really love all these profiles that you're doing, Penny. I haven't commented on individual profiles, but they're well done and I've enjoyed reading them.

Thanks Fridawrites, I have fun writing them, and they seem to get a lot of hits--I expect some of them are from schoolkids doing history projects? I like to think it's adding a few more life stories to the repertoire -- teachers must get tired of all the Helen Keller and Louis Braille reports, after a while... ;)