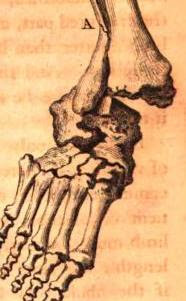 Observations on the Nature and Consequences of Those Injuries to which the Head is Liable from External Violence To which are Added, Some Few General Remarks on Fractures and Dislocation By Percivall Pott

Doctors sometimes write about or from their own personal medical experiences, because, well, doctors have bodies too. Think Oliver Sacks' A Leg to Stand On, or Claudia Osborn's Over My Head, or Jill Bolte Taylor's recent A Stroke of Insight (she's a brain scientist, not a physician, but the idea is similar).

An early member of the club is Percivall Pott, an English surgeon. At age 42, he fell off a horse and sustained a serious broken leg. The standard of care for his kind of injury in the 1750s was amputation--which wasn't much care at all, because the surgery itself was quite likely to bring death by sepsis. Instead, his friend and mentor Edward Nourse ordered his wound cleaned, reduced, dressed, and splinted. Pott wrote during his convalescence. Upon recovery, he wrote up the successful treatment in Some Few Remarks Upon Fractures and Dislocations (1768). The book became a popular reference for surgeons in much of western Europe. "It is possible that but for his accident Pott would not have turned to authorship, and surgical literature would have been the poorer," commented Brown and Thornton (see below). Because bonesetting in Pott's day was considered something requiring only minimal skill, he cautions readers from the outset to beware bonesetting quacks, in terms not too far off from today's advice:

The desire of health and ease, like that of money, seems to put all understandings and all men upon a level; the avaritious are duped by every bubble, the lame and the unhealthy by every quack. Each party resigns his understanding, swallows greedily, and for a time believes implicitly the most groundless, ill-founded, and delusory promises, and nothing but loss and disappointment ever produces conviction. (Pott, 2)

Pott is also credited with being the first scientist to link cancer to environmental causes, when he found an association between exposure to soot and a specific cancer of the groin common to chimney sweeps. (The first signs of the cancer were called "soot-wart" by sweeps.) One of the earliest occupational safety laws in the UK was written in part as a response to Pott's discovery. Pott also wrote on spinal arthritis, head injuries, and hernias.