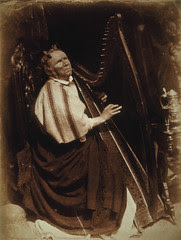 [Image above (click through for a better version): vintage photo of an older man, wearing blanket-like draped robes and a laurel wreath on his head, seated at a harp]

Last year marked the 200th anniversary of the 1808 founding of the Irish Harp Society in Belfast, one of the first schools in the world for blind musicians. In its first years, the school taught music in Irish, because the technical terms the teachers used were Irish words. So the school was considered both a vocational training program and a cultural preservation effort.