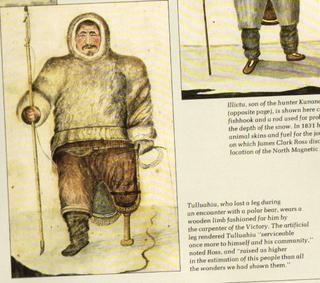 I've got a file on my desktop of disability history images, and it occurs to me that they might be something to share here, once a week or so (now that I know how to post images to a blog). They're a pretty random lot, as you'll see from this first one. It's from a Time/Life volume, titled The Northwest Passage by Brendan Lehane (Time-Life 1981), from a series called "The Seafarers." The caption tells the tale:

"Tulluahiu, who lost a leg during an encounter with a polar bear, wears a wooden limb fashioned for him by the carpenter of the Victory. The artificial leg rendered Tulluahiu 'serviceable once more to himself and his community,' noted Ross, and 'raised us higher in the estimation of this people than all the wonders we had shown them.'" (125)

The illustration is a watercolor by Captain John Ross, whose ship (the Victory) and its crew became trapped in ice on the coast of the Boothia Peninsula (the northernmost tip of the North American mainland) in 1829. The volume's picture credits say the originals are at the Scott Polar Research Institute in Cambridge, England.

There's a recent book on the Ross expedition's time on the Boothia Peninsula: Ray Edinger, Fury Beach: The Four-Year Odyssey of Captain John Ross and the Victory (New York: Berkley 2003). It's reviewed here.

I know "fun" isn't quite the right word, but someone with a good collection of useful material who's willing to share it always makes me think that there's hope for this web-thingy after all....

A picture may be worth a thousand words but it can seldom tell the whole story. What about the psychological impact of losing a limb? It’s one thing to be “'serviceable” and another to be whole. Consider Capt. Ahab of the Pequod and Capt. Boomer of the Samuel Enderby. Both lost a limb to the white whale [the former a leg - the latter an arm], yet the aftermath of the matter resolves differently in their psyches. Ahab feels personally affronted his loss while Boomer chalks up his to the cost of doing business. Ahab’s anger becomes a quest for revenge while Boomer is able to make merry of his personal foolishness. Ahab wants nothing less than a face to face confrontation while Boomer only desires to steer clear. [ch. 100]

Wikipedia has an interesting list of fictional characters missing an appendage.

Hi, just came across your blog. I have a small academic interest in schools for the deaf established in German populated areas of the USSR during the 1920s. I know there was one in Azerbaijan and one in the Molochanskii colonies in Ukraine. So far I have not found much on them. I would love to find photographs of the buildings.