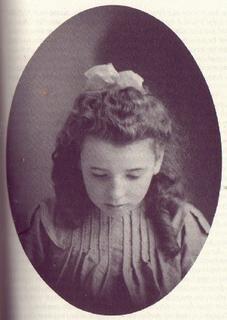 This photo is found in Esther Lanigan's Mary Austin: Song of a Maverick (Yale University Press 1989). It's a photo of Ruth Austin (1892-1918), writer Mary Austin's daughter, taken in Santa Clara, CA, just before she was placed in a "nervous hospital" in that same town, in 1904. There is at least one other image from this photo session, at the Huntington Library (Austin Papers), showing Ruth looking off-camera to the viewer's right.

AutismDiva has posted a some historical portraits recently (Someone's Cousin Moe, Antique Autistics), in the interest of combating the widespread belief that autism was somehow "new" in the late 20th century. In the case of Ruth Austin, we have a glimpse of how her behavioral characteristics appeared to Helen MacKnight Doyle, a physician friend of Austin's, years before Ruth was institutionalized. She described the "beautiful" child's "restless uncertain movements of her small hands," "strange sounds," and "passionate, ungovernable spells." It seems likely that she would have an autism diagnosis today. At the time, she was most often labeled "hopeless."

Ruth Austin was placed in Dr. Antrim Osborne's small Santa Clara hospital in 1904. According to the 1910 US Manuscript Census returns, the hospital had nine on-site staff members (including Osborne and his wife, two nurses, a teacher, a waitress, a housekeeper, a male attendant, and a cook--the cook was Chinese-born, all the rest were born in the eastern US). Ruth was, in 1910, one of 22 inmates, all white, male and female, mostly US born and under 40. Five of the inmates under 18, including Ruth Austin, are listed as having attended school in the preceding year.

Mary Austin never visited her daughter at the Osborne hospital, as medical advice in the day said parents would interfere with their child's treatment in such institutions. In fall 1918, Ruth Austin died in the worldwide influenza epidemic, at the age of 26.

Cites: I haven't published anything directly about Ruth Austin, but I have a book chapter out there that touches on her story: "Bad Blood and Lost Borders: Eugenic Ambivalence in Mary Austin's Short Fiction," in Lois A. Cuddy and Claire Roche, eds., Evolution and Eugenics in American Literature and Culture, 1880-1940 (Bucknell University Press 2003). Dr. Antrim E. Osborne is mentioned and quoted in James W. Trent Jr.'s Inventing the Feeble Mind: A History of Mental Retardation in the United States (University of California Press 1994): 83, 90-91. Helen MacKnight Doyle's biography of Mary Austin is Mary Austin: Woman of Genius (Gotham House 1939).
Posted by Penny L. Richards at 12:55 PM

Re: Ruth Autsin. This is fascinating. Thank you.

Here's another one about antique autistics... it's especially interesting because it involves Lewis Terman, of "Termite" fame.