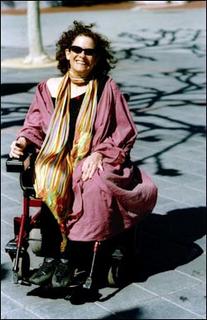 Activist Simi Linton: “Disability studies is us looking out at the world and seeing how that looks to us.” photo: Ruth Morgan

Lest America divide too neatly into red/blue, NASCAR/latte blocs, one constituency can be counted on to muck up the dichotomy. People with disabilities defy political pigeonholing. The group considers itself an oppressed minority, and its civil rights agenda grew out of 1960s radicalism. But on issues such as euthanasia, disabled people find themselves allied with "culture of life" enthusiasts. As disability activist Simi Linton says, "A lot of disabled people justifiably feel vulnerable to ideas held by their family and the medical establishment that our lives are less valuable. . . . That is why I'm categorically opposed to physician- assisted suicide, because I think some people are more likely to be assisted than others." For secularists, this argument is a bit harder to dismiss than "because God said so."

Now disabled people have gotten into the business of problematizing: Disability studies has arrived in academia. Of course, the medical study of disability is long-standing, but the new approach establishes an interdisciplinary field on the model of women's, queer, and ethnic studies. Linton, author of the upcoming My Body Politic (Michigan), explains: "The curriculum had traditionally housed disability in a very sequestered area—how to fix people and take care of them. Disability studies is us looking out at the world and seeing how that looks to us." It also critiques "how disability is represented in all kinds of texts—in literature, film, the annals of history."

The Society for Disability Studies (SDS) was founded in 1982, with an emphasis on social science. In the early 1990s, scholars working independently in the humanities began to discover each other's work at SDS conferences. Linton, whose legs were paralyzed in a car accident in 1971, describes these conferences as "quite chaotic. You've got 50 people who use wheelchairs, you've got blind people with dogs, you've got deaf people with interpreters. . . . And we all sort of move to accommodate each other. It's a powerful experience for outsiders coming in for the first time."

Today, Syracuse, UC Berkeley, UCLA, the University of Wisconsin, and others offer programs in the field. Locally, the CUNY Graduate Center launched a certificate program last fall, consisting of four courses on the cultural and political aspects of disability, which can lead to various degrees. For the past two years, Columbia has hosted a monthly seminar for area faculty and grad students. Organized by Linton and colleagues, its topics range from disability in late capitalism to the intersection of disability and queer studies. Just last May, the field was officially recognized as a division by the Modern Language Association (MLA).

Disability scholars aim to revolutionize the way disability is imagined in our culture. Rather than pathologizing individuals, they ask how society accommodates different bodies (or doesn't). Disability, they point out, highlights the dynamic nature of identity itself: Entry into the disabled community could be a matter of an overlooked stop sign or the emergence of a lurking gene.

Anyone who's taken a women's studies class or read Edward Said will be familiar with the terms of the field. The study of disability, like that of gender, race, and sexual orientation, is rooted in bodies perceived as "other." All of these disciplines use the language of critical theory—Foucault, with his interrogations of power, the body, and pathology, is big in disability studies. And these related fields can cross-pollinate. Rosemarie Garland-Thomson, who teaches in the women's studies department at Emory University, promotes the integration of feminist and disability studies. Her scholarship reveals unsettling parallels: Women have often been conflated with the disabled, beginning with Aristotle's representation of women as mutilated men.

Disability studies may sound esoteric, but it grapples with concerns any eighth-grader can relate to. The pressure to be normal is a major theme of the research. As Garland-Thomson has written, "[T]he cultural function of the disabled figure is to act as a synecdoche for all forms that culture deems non-normative." Disability discourse often touches on bodies that stray from the norm—"freaks," but also people considered fat, ugly, or funny looking.

Although disability has fruitfully integrated with other identity studies, the field has not always received a warm welcome. Alison Kafer, who teaches feminist and disability studies at Southwestern University, attributes resistance in part to funding, but on a deeper level, she notes that "women and queers and people of color have often been cast as sick. That's how discrimination was justified." Now those minorities are saying, "You know what—we're not sick," and they shun association with people still seen as defective. The ambivalence is mutual; some disability scholars want to jump from what they see as the sinking ship of identity studies. As University of Illinois at Chicago's Lennard J. Davis pointed out in a 2004 conference paper, "We are in a twilight of the gods of identity politics, and there is no Richard Wagner to make that crepuscular moment seem nostalgic and tragic." So disability studies has arrived, but is it too late?

Despite the falling currency of identity studies, the field's institutional gains are clear, if modest. But institutionalization may not be the primary goal. As Garland-Thomson says, "We don't necessarily need people majoring or minoring in disability studies. We need to create a system in which educated people have it as a category of understanding." She observes that many canonical literary works have a neglected disability aspect: Ahab in Moby Dick is an amputee, Shakespeare's Richard III is a hunchback, and several of Toni Morrison's characters are disabled as well as black and female. "You wouldn't have to teach a class called 'Disability and Literature,' " she says. In studying literature—or any subject—disability is simply an additional lens at our disposal. In literature, Garland-Thomson has found, disability is typically reduced to a metaphor, shorthand for strangeness.

Exciting scholarship is being generated. Last March's issue of the PMLA (the MLA's publication) featured papers from a recent MLA conference, including "Deaf, She Wrote: Mapping Deaf Women's Autobiography" and "Crip Eye for the Normate Guy: Queer Theory and the Disciplining of Disability Studies." One item on the field's agenda is to welcome cognitive disabilities into the fold. SDS continues to hold annual conferences as well. "I come back from SDS so excited," says Linton. "My colleagues are the smartest people I've met, ever."
Posted by Mike Dorn at 11:55 AM

Thanks for posting this, Mike--and nicely done with the photo, too. It seems to me that PWDs aren't the only ones "mucking up the dichotomy" --every analysis piece on Latino voters makes that point too, at least out here in California (where we don't have many issues that have only two sides, anyway).