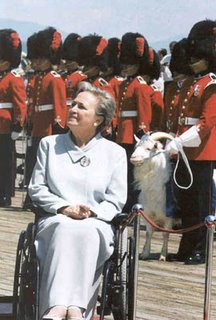 "If a sign were put on the front door requiring all women and francophones to use the back door, how would the media respond? Would they see the issue as less important than health care?"


Today is the birthday of Lise Trudel Thibault, lieutenant governor of Quebec. Thibault fractured her spine in a tobogganing accident in 1953, and has used a wheelchair since further injuries sustained during pregnancy and childbirth in the early 1960s (she has two daughters). She was a teacher, and then a broadcaster, before her 1977 appointment to a commission of the Quebec Ministry of Education. From 1993-1995, she was the President of the Office des personnes handicappées du Québec. And in January 1997, she was sworn in as the province's lieutenant governor, the first woman and the first wheelchair user to hold that position.

The lieutenant governor's office and the building it was in were both inaccessible when she took the job, and some in the Quebec media questioned the expense of making the basic accommodations necessary (replacing deep-pile carpeting with wood floors; replacing a heavy historical door with a lighter door and automatic opener, and a steep maintenance ramp at a back door with a safely useable ramp at a front entrance). But they were made nonetheless, and Thibault serves today as Quebec's ceremonial head of state.

In addition to her civil service, Thibault is an avid skier (she was named Skier of the Year in 2003 by the Canadian Association for Disabled Skiing) and golfer. She has hosted radio programs on the CBC, and written books on French tapestries.
Posted by Penny L. Richards at 7:15 PM

This is a great Blog! But health care costs money.
If you want to supplement your income you need
a simple method. Even with the severest handicap,
you can work at home with a system that is as good
as owning your own ATM Cash Machine!
ATM CASH