Get some sympathy and comfort from the chum who knows you best,
That your sorrows won't run over in the presence of the rest;
There's a chum that you can go to when you feel inclined to whine,
He'll declare your coat is tidy and he'll say: 'Just look at mine!'
Though you may be patched all over he will say it doesn't show,
And he'll swear it can't be noticed when your pants begin to go. 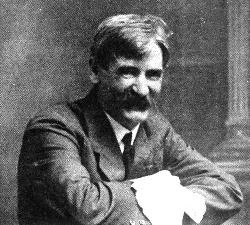 Born 140 years ago today, Australian poet and author Henry Lawson (pictured at right, a smiling man with an abundant mustache, wearing a suit). He began to lose his hearing following an ear infection at age 9; at 14, he was completely deaf, and left school. He worked on the railway and lived with his mother, who ran a small newspaper in Sydney. His first poem and first short story were published in his mother's newspaper. In the early 1890s, he wrote for a Brisbane newspaper, the Boomerang. He traveled Australia, worked as a sheep shearer, and hung around with Banjo Paterson, collecting material for his writing, which was popular in its day and is still prized and studied as a record of Australian bush life in the late 1800s. Lawson married and had two children before 1900, and taught briefly at a Maori school in New Zealand with his wife, Bertha.

Things turned for Lawson after he separated from his wife in 1902. His alcoholism became a problem in keeping a job; he was in jail and hospitals a good bit; he survived a suicide attempt with serious injuries, and was sometimes seen begging in the streets of Sydney. Friends found him a job and took care of him when he could no longer work; he died after a stroke, in 1922, at the age of 55. The huge state funeral that followed was the first one given for an Australian writer.

Biographies of this deaf balladeer and journalist include Colin Roderick's Henry Lawson: A Life (Harper Collins 1999), and Manning Clark, Henry Lawson: The Man and the Legend (Melbourne University Press 1995). Some poems by Lawson are online here, and here (not open-access).
Posted by Penny L. Richards at 10:39 AM

I didn't know he was deaf. I'm a huge Lawson fan: a few folk singers have been putting his poems to music for years now, and it inspired me to look up his stuff. I put The Shame of Going Back up a while ago. With those links you gave us, I can do a lot more now. Probably I'll start with this one...

Thanks, A., I'm glad to know that. Lawson's words do seem made for singing. I only ran across him a few weeks ago, when I was reading about Barbara Baynton (1857-1929), another Australian writer whose stories were about the hardships of bush life. They're sometimes discussed in tandem.

(Disability content there too: Baynton's story "Squeaker's Mate" is about a woman who becomes paralyzed in an accident while working with her husband; he's cruel to her after the injury, but in the end she figures out a way to take revenge on him and his new lover.)

The two North Americans who've been doing the most with Lawson musically are Priscilla Herdman and Garnet Rogers, the latter being the one who really got me interested.

Speaking of frontier life, we've been reading the Little House books with our little one, and Mary's just gone off to Vinton....