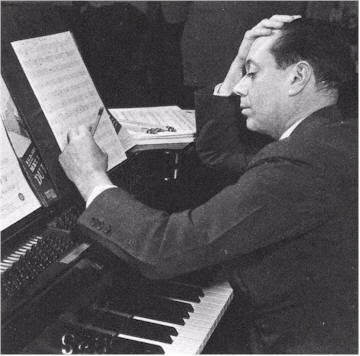 American composer and songwriter Cole Porter was born on June 9, 1891. He's best known for standards like "Just One of Those Things," "I Get a Kick out of You," and "I've Got You Under my Skin." In 1937, he was in a serious riding accident, and fractured both legs. He used a wheelchair or crutches for the last twenty-seven years of his life, but because few buildings were accessible in the mid-20th century, he was often carried into venues to perform, or parties to attend. He put his piano on blocks and continued to compose from his wheelchair. His post-injury works included Kiss Me, Kate (1948), which won him a Tony Award.

Chronic and severe pain, depression, alcoholism, and drug addiction were also part of Porter's difficult life after the accident--not all of that directly or solely traceable to his injuries, of course. He is known to have been treated with an early version of electroconvulsive therapy (ECT). Porter's right leg was amputated, after dozens of surgeries and decades of chronic pain, in 1958. He was fitted for a prosthetic leg, but never used it comfortably, and rarely left his home in his last years. During his life, the extent of his pain and injury were mostly unknown beyond his closest friends, but Porter has since been depicted as using a wheelchair in the 2004 film De-Lovely, and in stage productions of Red Hot and Cole.

I enjoyed this bio. I haven't seen Red Hot and Cole but did see the film DeLovely which had some stereotypes going and portrayed the disability as tragic and his lack of mobility as inevitable. There were fewer mobility options back then (I think that's a fair point to make) but it was very melodramatic. OTOH the music was excellent!

Thanks Ruth. I haven't seen De-Lovely --but what you say matches what I've heard, that they botched the disability aspects of his later years, sticking with the simplistic "tragic decline" and "bitter crip" cliches. But yeah, there's still the music... mmm.