Leadership Transition at the Institute on Disabilities [I of II]

In a pair of articles, the Temple Times honors Diane Bryen for her 17 years at the helm of the Institute on Disabilities, and introduces the new executive director, well-known disability studies scholar and filmmaker David Mitchell.

Changing uniforms:
While Diane Nelson Bryen is stepping down as executive director of the Institute on Disabilities, she won’t stop fighting for full inclusion of people with disabilities in all aspects of society.

Diane Nelson Bryen’s office in the Institute on Disabilities is a showcase of what she’s been able to accomplish with and for men and women with disabilities.

There are things that represent the places in which she’s taken the ACES (Augmentative Communication and Empowerment Support) program, such as Australia, India, South Africa, and Israel. There are awards from the various agencies for people with disabilities that she’s helped.
.
And there are lots of pictures — pictures of smiling young men and women who are leading lives that their disabilities might have prevented them from living years ago.
.
Through those pictures, Bryen gets the chance to see the fruits of her hands-on approach to working with children and adults with a wide variety of disabilities. As someone who has a brother with a disability, she sees just how important this work is. 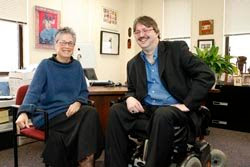 “I have always liked having my hand in the field,” said Bryen, who started her career at Temple as a special education professor. “This center serves multiple functions. We work with the community and we work with families and people with disabilities. We work with policymakers to change the system. We also do university-based research and teaching.”
And although she’ll be stepping down as executive director of the Institute on Disabilities in June, Bryen plans to keep working toward making things more equitable for people with disabilities.
Bryen came to Temple in 1964 as a student, eventually graduating with a masters degree in special education and a Ph.D. in educational psychology.
She started her teaching career at Temple in 1973 as a special education faculty member. While she had always had interaction with the Institute on Disabilities, it wasn’t until 1991 that Bryen was asked to lead the organization.
Under Bryen’s leadership, the Institute on Disabilities has achieved much. It has formed partnerships across the state to help provide people with such things as microwave ovens for the blind and high-tech computers that give those who have never spoken before the chance to communicate with loved ones.
One of the ways that those computers are being put to use is through the ACOLUG (Augmentative Communication Online Users Group), a listserv designed to provide an international forum for those with significant communication disabilities. The listserv currently has about 650 users, Bryen said.
But one of the institute’s most important achievements under Bryen’s watch is a greater awareness across the university of what disability is and isn’t, Bryen said.
“We’re changing the way that students at Temple are learning about disability,” she said. "Disability is a form of diversity. People with disabilities aren’t broken and need to be fixed. Instead, people with disabilities should be seen as a minority group and afforded equal protections, she added.
That’s something that C. Kent McGuire, dean of the College of Education, has come to know during his five years at the college’s helm. He has come to see Bryen as a tireless advocate for not only the people helped by the institute, but also for students interested in pursuing disability studies.
“I would describe her as passionate,” he said. “She’s committed to equality and social justice and is a very effective advocate for the disability community. She’s respected for that not only in Pennsylvania, but across the country. She’s also been a consistent supporter of Temple University students. Her presence and energy will be missed.”
Although she won’t be involved in the day-to-day operations of the Institute on Disabilities, Bryen, a Fulbright scholar and winner of the Lindback and Great Teacher awards, plans to remain involved.
“I’ve been at Temple since 1964 and have three degrees from here,” she said. “It’s hard for me to totally disengage from here. I wouldn’t have gone to college without Temple. Temple, like the institute, is a wonderful place that attempts to level the playing field recognizing that knowledge is power.”
.
For additional coverage, see Beth Haller's post at media dis&dat
Posted by Mike Dorn at 5:22 PM