This is my 2008 entry for Blogging Against Disablism Day 2o08. In 2006, I wrote about disablism in the suffrage movement, and the invisibility of disabled women in a popular US women's history text; in 2007, I wrote about disablism in North American immigration history, and the death of young George Everitt Green. This year, I'll continue in the nineteenth-century US historical context, but this time at a more intimate scale. I started doing disability history by studying 19c. American families' experiences around developmental disability--this is essay springs from that work.--PLR

Karly is a different being here. Living out of doors in the air which is the health of life to him, he grows sturdy & quiet & all his flying nerves are soothed into a delightful state of calm....he rows in his boat all the day long & is happier than a king.... he fishes & he drives in the flock of cows for milking & he digs his 'riverlets' as he calls them, in the wet sand in the upper cove, & he sails boats & leads a life of bliss generally & is petted & praised by all his kin until his eyes are wide with amazement, that being a kind of thing he isn't at all used to, you know.

--Celia Thaxter to Mary Lawson, in an 1860 letter from Appledore Island

Celia Laighton Thaxter (1835-1894) was an American poet from the New England context; she was close friends with John Greenleaf Whittier, Sarah Orne Jewett, and Annie Fields, among others. She grew up in the Isles of Shoals, a small cluster of islands about ten miles off the coast at Portsmouth, New Hampshire. Her parents ran an inn on Appledore Island. She married her tutor, Levi Thaxter, when she was sixteen, and their son Karl was born the following year, 1852, on Appledore Island. The birth was complicated, and Karl's later physical and mental impairments were always traced to that circumstance.

[Image description: A black and white portrait of a young mother holding one little boy, while a slightly older boy is sitting nearby--caption reads: "Celia Thaxter with John and Karl, circa 1856. UNH"] 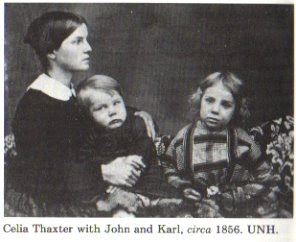 And soon two more sons were born, and the Thaxters were living on the mainland, and Celia was overwhelmed by a frustrating marriage and three little boys and the uncrossable distance to her mother and her favorite places. She started writing poetry, with her first published title, "Land-locked," revealing her distress. To a friend, she confided, "Oh, for your patience! How mine takes wings and leaves me forlorn and ugly and horrid!" (to Elizabeth Curzon Hoxie, 28 March 1857). Her letters from these years are full of loving stories of Karl's little boy antics, but as he grows older, the stories grow less charming, more troubled: "Karl and John do nothing but fight; they live on it all of the time; it's their bread and meat and drink." (also to EC Hoxie, 10 July 1861)

By 1869, Celia was visiting Appledore for long stretches, with Karl in tow, leaving Levi and the younger boys back. The summers in the Islands were meant to help Celia's aging mother; but they also kept Karl away from increasing rumblings, from acquaintances and even from Levi, that the boy should be institutionalized. On Appledore, he was safe from such pressures; and he was well away from the scrutiny of busybody neighbors, looking for a reason to criticize the youth. On the Island, he was happy and useful--there were frequent shipwrecks to clean up, with survivors needing assistance; there were elaborate gardens to be tended, and help around the house that he could do. He was still prone to odd behavior--"his poor head won't work quickly enough, you see," Celia wrote to an old friend--but on an island, Celia could mostly control the consequences.

In time, Celia sought more skills an adult Karl could develop, with an eye to his self-sufficiency. She arranged for him to learn photography, printing, and carpentry too, but none became a marketable skill, which was a constant concern for Celia. "I do not mind the thought of death, it means only fuller life, but there is a pang in the thought of leaving Karl," she wrote to Whittier in 1889. In the year of her death, she was still an enthusiastic gardener, with Karl by her side: "I work all day long, mostly out of doors, and there are so many pleasant things to do. Not easy, there is a great deal of hard work, but I love it all; and Karl is so good and helps me with the heavies, and we have such a good time together," reads a letter from April 1894.

That truly sounds lovely. However, there's a big downside to such cozy protected idylls: While she was alive, Celia Thaxter kept her son Karl safe, and well, and active. But Karl outlived Celia, and his last years without her were very difficult (he died in 1912, and is buried with his brothers and father at Kittery Point, Maine). His father was already dead, and his brothers didn't know him very well, or understand his needs. And neither did anyone else.

Celia Thaxter did what she thought was best for Karl, and she did it pretty well. But the lesson I read in the anguish of her later letters is that the protective carer/cocoon model isn't, in the end, a great response to the problem of disablism, because nobody lives forever, and no cocoon is permanent. Instead of trying to insulating ourselves completely away from the disablism of the world, appealing as that seems in the short term, and necessary as it may be at times, we'd surely do better to confront the disablism whenever possible, learn how it works, make alliances and work for change in our communities... or we'll always live in fear of the future.

FINAL NOTE: I haven't published anything about Celia and Karl Thaxter, but I discussed them and other families in a conference paper a few years ago, and if you want a pdf of it, email me, I'll be glad to send it along. Here's the cite:

Thanks for sharing this story, Penny. I would be interested in your pdf file. It is a good reminder that even though the cocoon feels tempting, we need to face the disablism.

This was really well written and made a very good point. Thank you.

Another wonderful post. I see this problem regularly. Protection from the world is not the answer, never has been ... this is a perfect example. Thank you.

Even the best caregivers can sometimes coccoon too much...That's why this is such an important idea.

This is a great example of a very important topic... and so relevant today! Excellent work.

As a mother it helps me to learn from other's mistakes, even from so long ago. While we instinctly try to protect our children, we also need to realize that they need some level of independence.

Thank you for sharing this story.

Thank you so much for this, Penny. You are such a wonderful resource. Yes, you, the keeper of the true stories of real people.

I would like a copy of your PDF, if possible. I am the curator and historian for Star Island, next to Appledore Island. I can be reached at vaughn at starisland dot org. Thank you!