Leadership Transition at the Institute on Disabilities [II of II]

In a pair of articles, the Temple Times honors Diane Bryen for her 17 years at the helm of the Institute on Disabilities, and introduces the new executive director, well-known disability studies scholar and filmmaker David Mitchell.

Shattering the “glass staircase”
David Mitchell, the new executive director of the Institute on Disabilities, wants to make the academy more accessible.

David Mitchell, the new executive director of Temple University’s Institute on Disabilities, hopes to change that by making Temple an option for those in the Delaware Valley who want to earn their Ph.D. without having to go to Chicago or leave the country.
Mitchell, who served as the first permanent director of the PhD in Disability Studies at the University of Illinois-Chicago, has made one of his goals expanding Temple’s Disability Studies program from its current status as a place where you can get a certificate to one where you can get a degree, he said. [Addendum: Dr. Mitchell stepped down from the director position at UIC in 2004 and since then the position has been held by Dr. Carol Gill.] 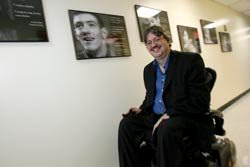 “The goal is to grow Disability Studies at Temple into the most significant and influential home for Disability Studies in the United States,” Mitchell said.
Doing that will require a holistic approach, says Mitchell, who has written books on people with disabilities and their place within the humanities. While Temple is a more accessible campus to people with disabilities than most, a sea change is necessary for the academy overall, Mitchell said.
“Universities have been a ‘glass staircase,’” he said, referring to the lack of research and academic work that has been done on people with disabilities and the challenges they face. “Disability studies was created to infuse universities with opportunities for people with disabilities and to bring to them the realization that we all share a public space.”
The creation of Institutes on Disabilities like the one at Temple has helped make this public space available to people regardless of their physical abilities. Mitchell praised his predecessor, Diane Bryen, for making the institute what it is today, adding that he doesn’t see it changing much. Bryen, who was one of the first wave of disability activists who ran these institutes, is retiring this year.
Mitchell has done much of his work with his wife, Sharon Snyder, who is on the faculty of the University of Illinois-Chicago. He has two children, Cameron, 16, and Emma, 12.
Mitchell officially becomes the executive director of the Institute on Disabilities July 1.
For additional coverage, see Beth Haller's post at media dis&dat
Posted by Mike Dorn at 5:39 PM