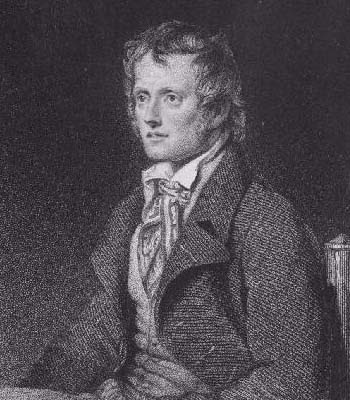 [Image description: Engraved portrait of the poet John Clare, shown with tousled hair, wearing a suit with a heavy coat, vest, and a shirt loosely tied up with a print kerchief]

English poet John Clare was born on this date in 1793, in Helpston, near Peterborough. He was the son of a laborer, and himself a laborer, a gardener, who wrote poetry when he could, to be published by an acquaintance. His earnings were never enough to adequately support his wife and seven children (and his alcohol consumption); he experienced depression and later erratic behavior. In 1837 he was placed in a private asylum. After four years, he tried to live at home again, but his wife soon committed him again, this time to the Northampton General Lunatic Asylum, where he eventually died in 1864. It was at Northampton that he wrote his best known poem, "I Am," reflecting his sense of being abandoned by friends and loved ones, his vivid torments, and his longing for rest, "untroubling and untroubled."

I AM
John Clare

I am; yet what I am none cares or knows,
My friends forsake me like a memory lost;
I am the self-consumer of my woes,
They rise and vanish in oblivious host,
Like shades in love and death's oblivion lost;
And yet I am! and live with shadows tost

Into nothingness of scorn and noise,
Into the living sea of waking dreams,
Where there is neither sense of life nor joys,
But the vast shipwreck of my life's esteems;
And e'en the dearest--that I loved the best--
Are strange--nay, rather stranger than the rest.

I long for scenes where man has never trod;
A place where woman never smil'd or wept;
There to abide with my creator, God,
And sleep as I in childhood sweetly slept:
Untroubling and untroubled where I lie;
The grass below--above the vaulted sky.

Anonymous said...
This comment has been removed by a blog administrator.
4:06 PM