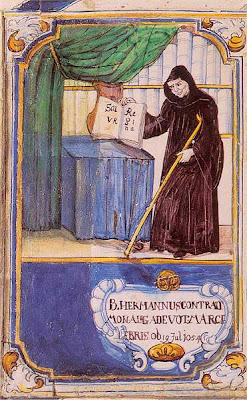 [Image description: A painting showing a brown robbed monk, Hermann, holding a crutch in one hand and a book in the other, with a harp nearby, and the words "Salve Regina," the name of his best known composition; found here]

Maybe some of the fine medievalists blogging about disability history can help with this one: I saw reference to Hermann von Reichenau's birthday today (the Catholic Encyclopedia gives the date as 18 February instead; still, five years till his 1000th!). The son of a nobleman, he didn't walk, and was hard to understand when he spoke, so the assumption is usually that he had CP or something similar. He was called "Hermann der Lahme," or "Hermannus Contractus" or Hermann the Lame, Hermann the Twisted. At age 7 Hermann entered the monastery at Reichenau. There, he became an expert on Arabic mathematics and astronomy, composed hymns and poetry, and wrote historical chronicles and treatises on music theory and math games. He seems to have introduced the astrolabe to central Europe, among his other accomplishments.

The relics on display here seem to include part of Hermann's skull? Am I seeing that right?

While I'm on the subject of cloisters, I recently read Mark Salzman's Lying Awake (Vintage 2001), a short novel about a cloistered nun in 1990s California who's diagnosed with temporal lobe epilepsy. But Sister John, a published poet, experiences her seizures as ecstatic spiritual revelations, and isn't sure she wants to lose that by having the recommended neurosurgery. The story follows her decision-making, the conversations she has with doctors and priests and her sisters in the community. It's thought-provoking, because the life of a woman religious involves vows and habits of selflessness that affect her criteria for deciding about medical treatment. (If the author's name rings a bell, Mark Salzman is married to filmmaker Jessica Yu, who won the Academy Award for her 1996 short-subject documentary Breathing Lessons--about Berkeley poet Mark O'Brien, who used an iron lung.)
Posted by Penny L. Richards at 12:19 PM

It certainly looks like a skull. A friend in nursing school agrees. I guess it's a fitting relic for such a saint!

I've never come across Hermann before, so this is incredibly interesting! I love the iconography! I will definitely have to look him up further. I wonder if his Life has any details about his childhood at all.

What Eaquae Legit said. I haven't come across Hermann either, but that's probably because I've been focusing on legal records for the past two years.

I like your blog. Thank you. They are really great . Ermunterung ++ .
Some new style Puma Speed is in fashion this year.
chaussure puma is Puma shoes in french . Many Franzose like seach “chaussure sport"by the internet when they need buy the Puma Shoes Or nike max shoes. The information age is really convenient .