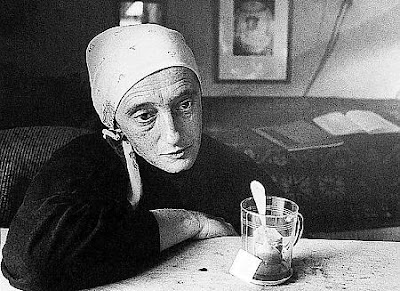 [Image: Black-and-white photo of a woman, Christine Lavant, wearing a headscarf, gazing at an empty glass of tea on the table she's seated behind]

"Illusions, to be sure, are safe, are precious, but the truth is
usually more important."

Austrian poet Christine Lavant was born on this date, the youngest in a big family based in a Carinthian village. Her father was a miner, her mother a seamstress. Christine was sick a lot as a kid--one infection damaged her vision when she was an infant, another made her deaf in one ear as a teenager; her face and neck bore the scars of experimental x-ray treatments; tuberculosis and depression were also in the mix. At 20, she was hospitalized for six weeks after a suicide attempt; in 1946 she recorded the experience in "Memoirs from a Madhouse," but wouldn't allow its publication until decades after her death. It's now available in an English translation (Ariadne Press 2004).

Lavant became a highly respected poet in Austria, and won the Grand State Prize for Literature in 1970. One of her short stories, "Das Kind" (1948) is about a hospitalized child, bandaged, confused, lonely, dreaming of her family. Her 1956 volume of poems, Der Bettlerschale (The Begging Bowl) reflects her themes of need, abandonment, alienation, and melacholy. A 1978 collection of her poetry appears under the title Art Like Mine Is Only Crippled Life (from a quote by Lavant). There are English translations of a few Lavant poems here and here.
Posted by Penny L. Richards at 9:51 AM