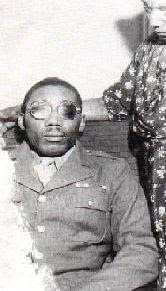 I hope we, as a nation, will NEVER forget Mr. Woodard's sacrifice... hopefully the enemy he faced at home has been extinguished forever.

Let's end all racism now (LEARN) by learning to co-exist...dedicated to Isaac Woodard and other humanitarians. http:www.learn2coexist.blogspot.com

to listen to Orson Welle's original broadcasts about Mr. Woodard, courtesy of archive.org: