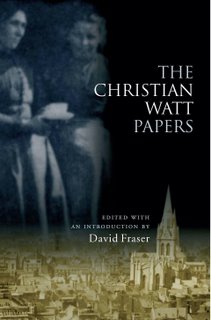 It may be obvious by now how much time I spend trolling around in the Oxford Dictionary of National Biography for interesting stories of women's lives. Two stories from disability history came up today, attached to women whose birthdays landed on February 24:

Christian Watt (1833-1923) was a Scottish fisherman's daughter, fisherman's sister, fisherman's wife, and fisherman's mother--and went to sea herself as needed. She had ten children too. Her hard life got harder during the 1870s, when a succession of untimely deaths (her husband and four of her children) left her feeling bereft. She was admitted to the lunatic asylum in Aberdeen in 1877, and was permanently an inmate by 1879--so she lived nearly fifty years in the asylum. Christian Watt wrote a memoir while a patient--with a pencil, because ink was considered a safety hazard. Watt's memoir was edited and published in 1983, and remains a unique source for Scottish women's history--has it been read as a source in disability history yet? (I haven't seen it myself, but I'm very curious.)

Grace Eyre Woodhead (1864-1936) was a generation younger than Christian Watt, and born at the other end of Great Britain, in Brighton. Woodhead's scheme to bring hospitalized London children to a seashore retreat on holidays became a private charity serving institutionalized people with mental and physical disabilities. As a response to the 1913 Mental Deficiency Act, the Brighton Guardianship Society under Woodhead's direction provided respite care for families, placed institutionalized individuals in family care settings, ran an outpatient clinic and some basic agricultural job training and placement services for its clients, and otherwise encouraged inclusive community life, in the social climate that much preferred segregation models. The society was renamed the Grace Eyre Foundation in 1988, and continues to promote an array of community-based services.
Posted by Penny L. Richards at 3:42 PM