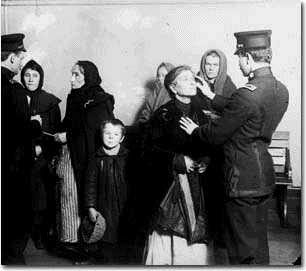 [A May 1 post in observance of the second annual Blogging against Disablism Day, organized by the Goldfish. Go check Diary of a Goldfish for links to scores of other blogs posting today on the topic of disablism.--PLR]

Last year, my Blogging Against Disablism Day post was about disablism in the American suffrage movement, and the consistent invisibility of disabled women in a current US women's history text. This year, I want to consider another big story in North American history--the great waves of immigration from Europe in the late 19th/early 20th century. Where's the disablism? In sum, exclusionary laws required officials to identify people with various disabilities at various points of arrival, and forbid them entry into the US and Canada, under the assumptions that (a) they would be a drain on the public purse, and/or (b) they would weaken the "national stock" with their faulty constitutions. At Ellis Island today, you can see photographs and artifacts of this inspection process. Note that, discrimination against disabled people wasn't a benign oversight, nor an unforeseen consequence of broader policy--disability discrimination was the policy. As Douglas Baynton has explained,

"One of the fundamental imperatives in the initial formation of American immigration policy at the end of the 19th century was the exclusion of disabled people. Beyond the targeting of disabled people, the concept of disability was instrumental in crafting the image of the undesirable immigrant." (Baynton 2001: 45)

(This statement is made in regards to US immigration history, but would apply to the Canadian case as well.)

But what if you passed through the inspection without being detected? One of the most haunting stories in the history of disability and immigration policy is the tale of George Everitt Green (1880-1895), an English teenager 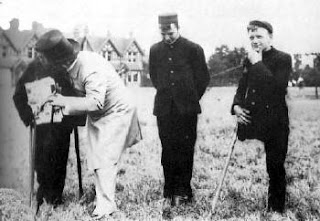 who was transplanted to Canada as part of the "Barnardo scheme" to settle orphaned and destitute boys with Canadian and Australian foster families. (There were parallel schemes for girls.) He was born in London, and left to the care of the local parish at the age of 6. When he was 14, George and his brother Walter went to live at a juvenile home, and in March 1895 the Green boys were on a boat for Canada.

George Green was placed with Helen Findlay, a single woman who had a farm outside Wiarton, Ontario. Her brother had recently died, and she needed help with the farm work; a teenaged boy seemed like a good match. But Green couldn't match Findlay's expectations: he was small for his age, he had "defective vision" and was called "backward." On the evening of 8 November 1895, seven months after his arrival at Findlay's farm, George Green died. An autopsy found signs of malnutrition, frostbite, gangrene, and frequent beatings (neighbors confirmed that Findlay hit Green, often). Findlay was charged with the death, and her trial was front-page news in much of Canada. A hung jury couldn't reach a conclusion on Findlay's guilt. She was never convicted. (A later effort to convict her of child abuse and neglect was also unsuccessful.)

But there were consequences paid in the wake of Green's death. Instead of seeing the Green-Findlay story as a crime against a vulnerable foster child placed in the home of a violent adult, the Canadian press spun Findlay's violence as extreme but understandable, and framed immigrant children as "diseased offscourings of the hotbeds of hellish slumdom" (quoted in Wagner 1982: 150-154). To review:
On Blogging Against Disablism Day, I'm remembering George Green, whose short sad life was ended not by any underlying medical condition, but by one woman's hatred and intolerance for his disability status, in a world that pretty much agreed with her.

IMAGES:
Upper, left: immigrants undergoing medical inspection at Ellis Island, found here.
Lower, right: A photo of some Barnardo boys still in England in 1905, showing some with crutches; this was taken a few months before Thomas Barnardo's death that same year, and is found here.

POSTSCRIPT: Barnardo was famous for photographing every boy he emigrated, before they set sail for their new homes. So there must have been a picture of George Green, taken at age 14. Anyone have any leads? There were probably newspaper images in the Findlay trial coverage, but I haven't found those yet either.

ANOTHER POSTSCRIPT: We posted last Canada Day about two recent cases before the Canadian Supreme Court, in which families immigrating to Canada were initially turned away because their disabled children might impose "excessive demands" on state services. The majority ruled that such broad interpretation of immigration law was not in keeping with the law's intent and purpose. So that's what's been happening lately on the subject. (Caughtya asked.)

Gillian Wagner, Children of the Empire (Wiedenfeld and Nicolson 1982).

A FEW SUGGESTIONS FOR FURTHER READING:
June Dwyer, "Disease, Deformity, and Defiance: Writing the Language of Immigration Law and the Eugenics Movement on the Immigrant Body," MELUS 28(1)(Spring 2003): online here.

Howard Markel and Alexandra Minna Stern, "The Foreignness of Germs: The Persistent Association of Immigrants and Disease in American Society," Milbank Quarterly 80(4)(2002): 757-788.

Thank you for this interesting bit of history. My question is, however, have immigration practices *really* changed? Sure, it's not written in the books, but...

Having gone through US Immigration as a wheelchair user, and being of Canadian origins, I can tell you, road blocks at every turn. I have no experience with today's immigration to Canada, but I can well imagine that anyone perceived as being a potential drain on the socialised medecine system would be turned away at the door. Nicely, but irrevocably.

I fear things aren't so "advanced".

So, things have somewhat changed, but only very recently...and only somewhat.

Sorry, I'll put the link in the body of the entry, as another postscript.

Oddly, if you tell people that story now, most will likely express sympathy/outrage for the boy... Yet the majority of personal responses, media quotes, and even things said by certain major parent-support orgs match what was said about that poor boy.

Illuminating (albeit horrifying) post about the treatment of pwd. I'm glad you included references for more reading - especially the article about eugenics/immigration.

Truly horrifying, and something I knew nothing about.

A horrifying story. It is quite unbeleiveable that discrimination that happened to disabled people in the past. And equally horrifying how they have been forgotten by the historians.

Thank you for bringing this story to our attention.

Wow! I had no idea. Thanks for exposing this.
Janet

It's amazing how many stories are missing from the history books. Thank you for posting this, in memory of George.

Thanks Penny for bringing this story to light.

You know what blows my mind in re-visiting such atrocities throughout history is that there were not more passionate/compassionate people who would shout about the disgusting events that we can not imagine today. And yet we have our own atrocities still taking place. So we still do need to shout. Thanks Penny for helping us!

caughtya, I have also heard that there are hard hurdles to jump in adopting a child with disabilities internationally into Canada. I would love to learn more about both situations.

This creeped me out so badly on so many levels I had to go away and come back again.

I can't even express why yet. I think it might be that I think people are still like this, just under the surface; I know some people are like this overtly. I hate the idea of being alive at the pleasure of other people, but we all are, no matter what our disability status is, and it would be nice if we could depend on that pleasure to always be highly motivated, but...

It'd be nice if we could say "Well gosh, that doesn't happen today..." but I've seen a couple of news stories in the past year that tell me society simply has not rid itself of this troubling notion that "it's ok to kill someone if the way they work or try to meet your expectations doesn't work out..."

Fascinating post. I'm active in both the adoptive and disability communities (I know a couple of former Barnardos adoptees).

It's unfortunate to say abuse of those who have disabilities is still evident in some foster and adoption placements (and of course, in biological families).

Nowadays it seems it's usually because of inadequate home studies, the multi-billion business of adoption (where those facilitating are more interested in making the bucks in international adoption than finding the right "match") and the shortage of qualified, loving foster homes.

Finally, I'm getting to your BADD post. Wow. I have never heard of George Green before, or the Barnardos scheme. Thanks.

Photo of George Everitt Green from the National Archives Canada.
Copy and paste into your address bar