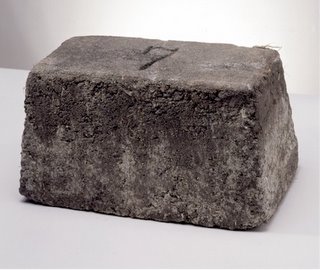 In a posting on DS-Hum tonight, Lawrence Carter-Long pointed out this story from the Poughkeepsie Journal. Bravo to the 1033 Group for replacing the numbers with names, and reminding the world that these 650 people were people.

Sadly, there are plenty more cemeteries full of numbers out there: Ingleside Cemetery in Nebraska, for example, has about 1000 pre-1956 markers, none showing names, just numbers, for former residents of the one-time "Asylum for the Chronic Insane" (now Hastings Regional Center). A Minnesota organization, "Remember with Dignity," has taken on the challenge of honoring the institutionalized dead by replacing numbered markers with names in that state. (When Minnesotan Bertha Flaten's numbered stone ["7," above] was replaced, the original marker was sent to the Smithsonian for display, along with her admission photograph.) Other states have similar projects.

I'm not the only historian of disability to start thinking of her first project while standing in a cemetery. But the cemetery I was standing in was Oakwood Cemetery in Raleigh NC, and the handsome obelisk I was looking at not only bore a man's name and dates (1806-1870), but the family's inscription, "Blessed are the Pure of Heart." Not typical for the gravestone of a 64-year-old man, but I knew a little about Thomas A. Cameron--I knew from his family letters that he was an "innocent," in the gentle language of his parents' generation. I wanted to know more.

And now, I hope someone will learn more about Anna Stecklin, and the other 649 people buried in Poughkeepsie.

Co-Editor's Note: DS-Hum is the acronym for the important and active discussion listserv called Disability Studies in the Humanities. The discussion list is open to all scholars and students interested in disability studies in the humanities fields and the arts. To subscribe to the list, you would need to send a message to LISTSERV at LISTSERV.UMD.EDU and the message should say SUBSCRIBE DS-HUM Yourfirstname Yourlastname [For example, I sent a message saying subscribe ds-hum mike dorn]. It may take a while for the list moderator to approve your subscription. Online management and list archives are available here - https://listserv.umd.edu/archives/ds-hum.html
Posted by Penny L. Richards at 10:50 PM