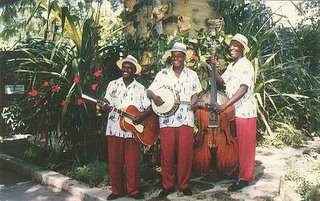 For Ahistoricality, here's the Bahamian banjo player "Blind Blake" (aka Blake Alphonso Higgs, b. 1915, pictured at left with his poolside band), who led the Royal Victoria Hotel Calypso Orchestra in Nassau. According to this bio, he was not blind as a child; liner notes say he became blind in 1934, and had a guide dog called "Music" who stayed with him during performances (but I can't find the dog in any photos of Higgs). His old LPs are collector's items, but a track by Blind Blake and his Royal Victorians is included on the more recent Putumayo Calypso compilation. Higgs is often credited with writing the folk music standard "Run Come See, Jerusalem," about a disastrous hurricane that hit the Bahamas in 1929--but it's also been credited as "traditional," and he surely never got the royalties he should have. [A fine online exhibit about calypso and its history is here.]

Turns out there was an earlier African-American ragtime guitarist called "Blind Blake" (c1893-1933; possibly named Arthur Phelps or Arthur Blake), but they were two different guys.
Posted by Penny L. Richards at 5:26 PM

The royalties issue is a tough one... copyright could well destroy us as a culture, if we take it too literally, but cases like this are the kind of thing for which copyright protections are really good.