Dynavox at the Parade 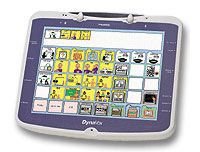 A balloon accident at the Macy's Thanksgiving Day Parade in New York City last week caused a lighting fixture to fall into the crowd, injuring 11-year-old Sarah Chamberlain (she's okay). But did you catch the disability culture angle of this story? Inclusion Daily's Dave Reynolds did. (Here's the Albany newspaper's version.) Seems the lighting fixture fell last into the lap of Sarah's sister--26-year-old Mary Chamberlain--or would have, if she didn't have her wheelchair's tray attachment in place. And a Dynavox communication device on the tray (shown at left). "We were going to leave Mary's tray in the van. But Sarah said, 'No. Mary needs to talk.'" Mary's got a unique parade story to tell now. (Macy's has agreed to pay the family's medical bills--and replace the Dynavox if it's unrepairable.)
Posted by Penny L. Richards at 12:40 PM

Talk about augmentative communication being the talk of the town! What a wonderful way to introduce the public this awesome way of speaking for people with disabilities.