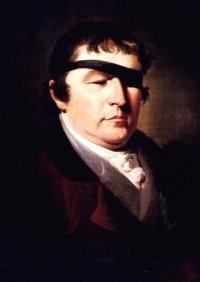 How can you, who have felt the oppressor's hard hand,
Who for freedom, all perils would brave,
How can you enjoy peace, while one foot of your land,
Is disgraced by the toil of a slave!

Today is the birthday of English abolitionist and poet Edward Rushton, born this date in 1756 in Liverpool. He went to sea as a young apprentice. At 17, he found himself disgusted at the treatment of Africans aboard the slave ships where he worked; he was charged with mutiny for his efforts to improve that treatment. When an epidemic of eye disease spread among the captives, Rushton tried to help. But he caught the disease himself, and lost his own eyesight.

Rushton returned to England frustrated by conditions he had witnessed, and began to publish poetry on political subjects, including The Dismembered Empire (1782), The West Indian Eclogues (1787), and Will Clewline(1806). He wrote noted letters to George Washington and Thomas Paine, questioning the hypocrisy of founding a nation based on human freedoms while maintaining the institution of slavery. Rushton married and had four children. He worked as a newspaper publisher and bookseller in Liverpool, and was involved in raising funds for the founding of the Liverpool School for the Indigent Blind (1791). In 1807, Rushton's vision was somewhat restored by surgery. He died in 1814.

"Edward Rushton," based on this historical figure, is a character in the unusual soundscape experience "The Dark," which exists both online and as a touring installation. "In The Dark your eyes will be of no use to you - instead, you will need to rely on your ears and your imagination to find your way through a maze of troubled ghosts and unlock the mysteries of their lives," explain the creators, and Rushton's poems are part of the audio content of the experience.
Posted by Penny L. Richards at 1:41 PM