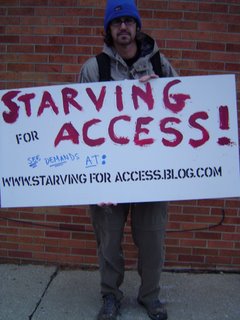 A very 2005 addition to the tradition of the hunger strike--a blog with daily updates on Ryan Commerson's outdoor hunger strike (starting Monday, November 21) to improve conditions at the Michigan School for the Deaf and at the Detroit Day School for the Deaf. So far, dozens of students and supporters have joined Commerson on the sidewalk outside the MSD gym in Flint, and he's been getting some local television coverage. It's cold in Michigan in late November, so some visitors have brought coats and blankets, too.

Says Commerson in his press release, "I have had it. I cannot tolerate the daily occurrence of language deprivation any longer."

[Hat tip to Dirksen Bauman, who posted about the Starving for Access blog on DS-Hum. I'd have put this in the monthly disability blogs roundup, but given the nature of this one, I thought it needed to go up sooner.--PLR]

UPDATE: Commerson's hunger strike has ended as of Monday 11/28. A vigil continues until promised changes begin to be realized.
Posted by Penny L. Richards at 11:46 PM